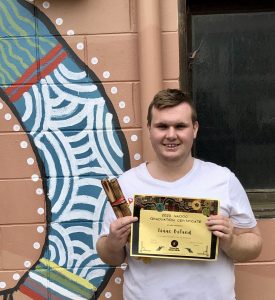 Isaac completed his HSC last year and when the exams are finished was part of a team of year 12 students commissioned to paint this mural. Isaac has strong connections with Australian Aboriginal culture and was the designer and consultant for all the imagery. We would like to share the story that he has gifted to the school through this mural.

Story of the Mural – by Isaac Osland

Each aspect of the Mural tells either one or multiple aspects of the school and its connection and respect for the Awabakal people and their history. The main theme behind this mural is strength through unity and honouring the traditional people of Australia, the two snakes themselves represent this since they are often seen as a symbol of strength, creativity and continuity across many Aboriginal Language groups, featuring strongly in the Creation Stories of the Dreaming.

The name ‘Awabakal’ means people of the plain or flat surface, which is believed to refer to the surface of Lake Macquarie, which is part of the Awabakal people’s territory that takes up the Mid-North Coast region of New South Wales. 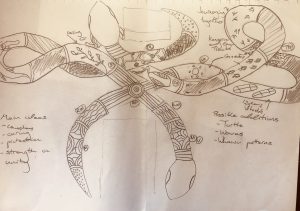