During the recent school holidays a beautiful rendering of Glenaeon’s bush landscape featuring ten different species of birds that inhabit the Middle Cove campus was installed on school grounds. The project had its genesis when Head of School, Andrew Hill, visited the Newcastle Waldorf School in January and saw some panels they had painted that depicted bird species which had their habitats decimated during the 2019-20 bushfires. Art Teacher Donna Miller and local ornithologist and Science teacher Dr Stanley Tang were both enthusiastic to create something similar at Glenaeon. One of the sessions of the Teachers Seminar PD days in January was devoted to painting a panel depicting some of the 100 or so species of birds that inhabit or visit the campus.

The session proved very successful. About a dozen teachers spent hours painting the panels at the seminar, and then later during Term 1 completed a sophisticated rendering of our bushland and some of its bird species. The panels turned out to be enormous, and when put together, measured 4.8 by 2.1 metres. They now adorn a wall of the Alice Crowther Building next to the café. 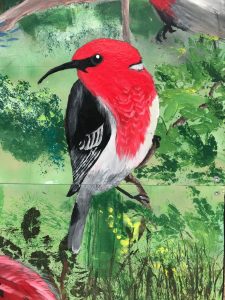 Stanley Tang spoke at the first assembly for the term on Wednesday, describing the ten species on the panel, and something of their colours and habits. He gave the High school students a challenge to see how many of the ten species they could recognise, as many are tucked away in the painting of the bushland habitat. How gratifying it was to come up immediately after the assembly and see a gathering of five students intently searching the panel to see all the birds. It’s a great piece of work that both adds a beautiful aesthetic to Glenaeon’s campus, as well as celebrating the local bush and birdlife. Congratulations to Glenaeon’s creative teachers. 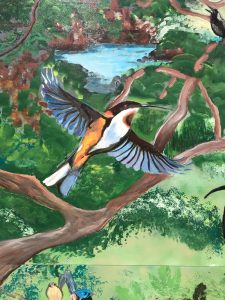 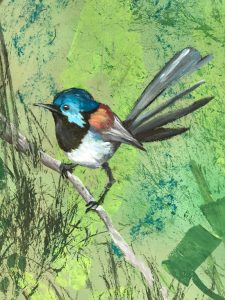