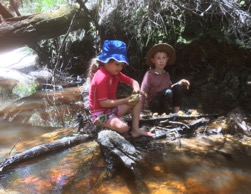 Golden Hill Steiner School is situated on Bibbulmen/Menang Noongar Boodja (Country) in the town of Denmark on the south coast of Western Australia. The school is blessed with a beautiful jarrah/karri forest and a creek behind the kindergarten. The Bush Kindy program explores the cultural interface between Steiner early childhood pedagogy (Steiner Kindergarten Curriculum Framework), indigenous frameworks of learning (local Noongar community, Yungaporta) and more generally the ethos of Bush Schools and nature-based learning. This program has been designed to instill in the children a deeper sense of connection to Place, based in this profoundly living learning environment, while embracing Noongar learning perspectives. 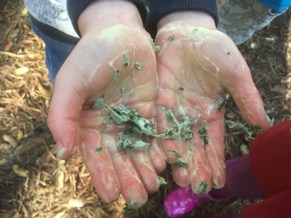 The program, which began in 2018, strives to be relationally responsive to local Noongar protocol, working particularly closely with local Noongar Elder and community leader Eugene Eades and his family. Golden Hill kindergarten teacher and music specialist Bruce Anthony has worked with Eugene for the past decade on a range of education and music projects.

Over the school year the program follows the course of the six Noongar seasons, and activities, rituals, songs and stories have been developed in direct response to the seasonal changes that occur in the school and forest environment. The creek, with all its seasonal changes, is a central character in many of the stories and songs the children learn. The program also incorporates Noongar language and names, as well as concepts that relate directly to the Bush Kindy experiences. This deepens the children’s sense of reverence and wonder in response to the environment as they experience it. The children also learn through the example of adults, the values of Caring for Country, relating respectfully to local Noongar Elders and following protocol appropriate to their age.

In August, the children were excited to welcome two senior Noongar elders, Nan Eliza and her sister-cousin Nanny Annie, to their Bush Kindy campsite. The visitors brought wonderful and moving stories of the hardships and joys of their childhood, as well as examples of the toys they used to make out of odds and ends when they were growing up on the Gnowangurup Reserve in the early 1950’s. They shared examples of dolls they used to make using scraps of material and wool over glass bottles, and the reverence with which they held them as they shared their stories resonated deeply with the children’s experience of Steiner dolls in the kindergarten. They also brought roller toys made out of old milo tins and coat hangers. The children were captivated, and remained attentive for much longer than any of us expected. It was a very special encounter between the Kindy children and the Elders, who were also very taken with the tranquility and beauty of the Bush Kindy campsite. 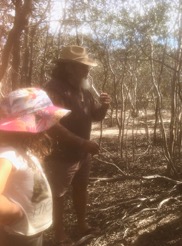 The Bush Kindy also recently welcomed some visiting academics from Murdoch University, Libby-Lee Hammond, lecturer in early childhood education, and Libby Jackson-Barrett, Indigenous Education lecturer, with a focus on on-Country learning. They were accompanied by Stella Louis, from the Froebel Institute in London and were visiting on-Country learning programs in southern Western Australia. The group met with Eugene at the Golden Hill Bush Kindy campsite, and spent several hours yarning. They later expressed their appreciation for the deep and authentic learning that the children were experiencing in the Bush Kindy program at Golden Hill. 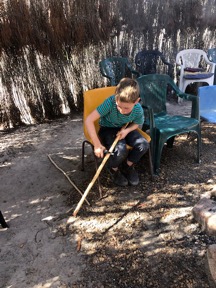 Most recently, the families of children nearing the end of their kindergarten journey were invited to participate in a Bush Kindy Campat Nowanup, a Noongar “Bush University” and Centre of Healing east of Albany where Eugenehas been the cultural facilitator for many years. This was the first group of children to experience two full cycles of the six seasons as part of their Kindergarten education. The children and their parents participated in a smoking ceremony, made tapping and digging sticks out of Sheoak and Jamtree wood cut by Eugene, listened to Noongar Creation stories under the stars, sang songs in language, visited sites of significance and walked together on ancient Noongar Country. It is difficult to describe in words the deep rejuvenating impact these cultural experiences of Noongar Boodja had for parents and children, and the deep sense of bonding that everyone felt over the course of the weekend.